Today is our 10 year anniversary from the Witch Creek wildfire in San Diego. My son Jonathan wrote this for our MakeUsSmile.com thank-you website a few years ago. This year, we’ve moved to the Bay Area and again lost 1/3 of our possessions (somehow the movers misplaced them!) so we keep learning to hold “things” loosely and remain resilient in the face of challenges.
That Night…What Happened  With The Fires 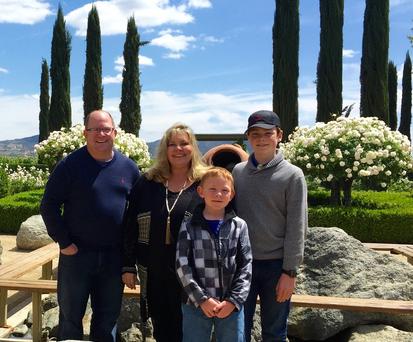 We try not to focus on the bad part, but in case you’re wondering, here’s some of what happened, from my mom’s perspective. That night, October 21nd, 2007 a terrible series of wildfires started in the countryside of San Diego. We lived more than 25 miles away, and were helping friends in the direct line that evening by phone. After a rather sleepless night, checking out of windows and peering into darkness, we waited watching a huge fire storm form as five separate fires merged together. Finally, at 4 a.m. on October 22nd, we got a knock on the door and there were flames in front of our home. Our neighbors saved our lives! We had about 5 minutes to grab some photos and our computers, and baby Joey and Jonathan (me) who was 4.5 yrs old, and my grandmother who was visiting. It was so dark and windy we didn’t see the flames shoot up, and the news was way behind in their reports. There were no firefighters on site. They were stretched too thin over several areas burning.

The Witch Creek fire took over 300 homes in our area that day. All together, more than 2 million people in Southern California were evacuated and there are thousands who lost their homes like us. By 5 a.m. our home was burning on national television. Our friends kept calling as we evacuated out of the area, since our home was the primary news feature. At Noon, firefighters were trying to save the upstairs, by the evening, it was all gone. Everything. We drove North to stay with relatives and gather our thoughts, as we watched national addresses from our front lawn from the local authorities. Our ruined home was on everything from Fox News, to all the main news stations nationwide.

Then we rented a home and tried to start over. Buying underwear and shoes. Buying clothes to wear. Trying to figure out what the “new normal” would be like. We rented from a string of people who went into foreclosure, and ended up moving 6 times in 2.5 years. Three of the first moves, we didn’t own much but one suitcase of clothes so it wasn’t too big of a deal. But all the moves, and watching people who had consumptive lifestyles get in trouble, taught us a lot. If we ever got our home again, we’d try to be less about stuff and more about living a life of meaning, thinking of others more often.

Then we had medical emergencies that plagued us, including my Dad’s stroke and miraculous recovery, some accidents with broken bones, sudden emergency moves with little notice, and instability for about 4 years. Now we live in a nice community and have made a new beginning. My brother and I are close and have grown up valuing friendship and things that really matter. We’re pretty good about handling difficult moments and talking rather than acting out. And we’re hoping to help and thank others along the way.

Thanks for your interest. We’d love to hear from you if this message touched you in any way, and Jonathan and Joey would like to stay connected through my Facebook and Twitter accounts, where they are frequent stars of the action, as well as my upcoming fantasy series that features a wildfire survivor, and a gem twist.

The kids are older, and we live in a different city that’s just been inundated with smoke from the wildfires slowly coming under control further north in Sonoma, Napa, and Santa Rosa. The floods hit our friends in Texas and Florida too. Life continues to offer great challenges and yet, without the experience of our wildfires, this blog and website wouldn’t have been here. You wouldn’t be reading this journey to resilience. I wouldn’t have met hundreds who’ve shared their stories, and be equipped to help others now. And the stories I write for teens and tweens may have been too shallow or without an edge. Is that worth losing everything? Let’s keep exploring the answer to that question. But for now, we see the glass as half full and long to help others shorten their paths through the dark side of life.