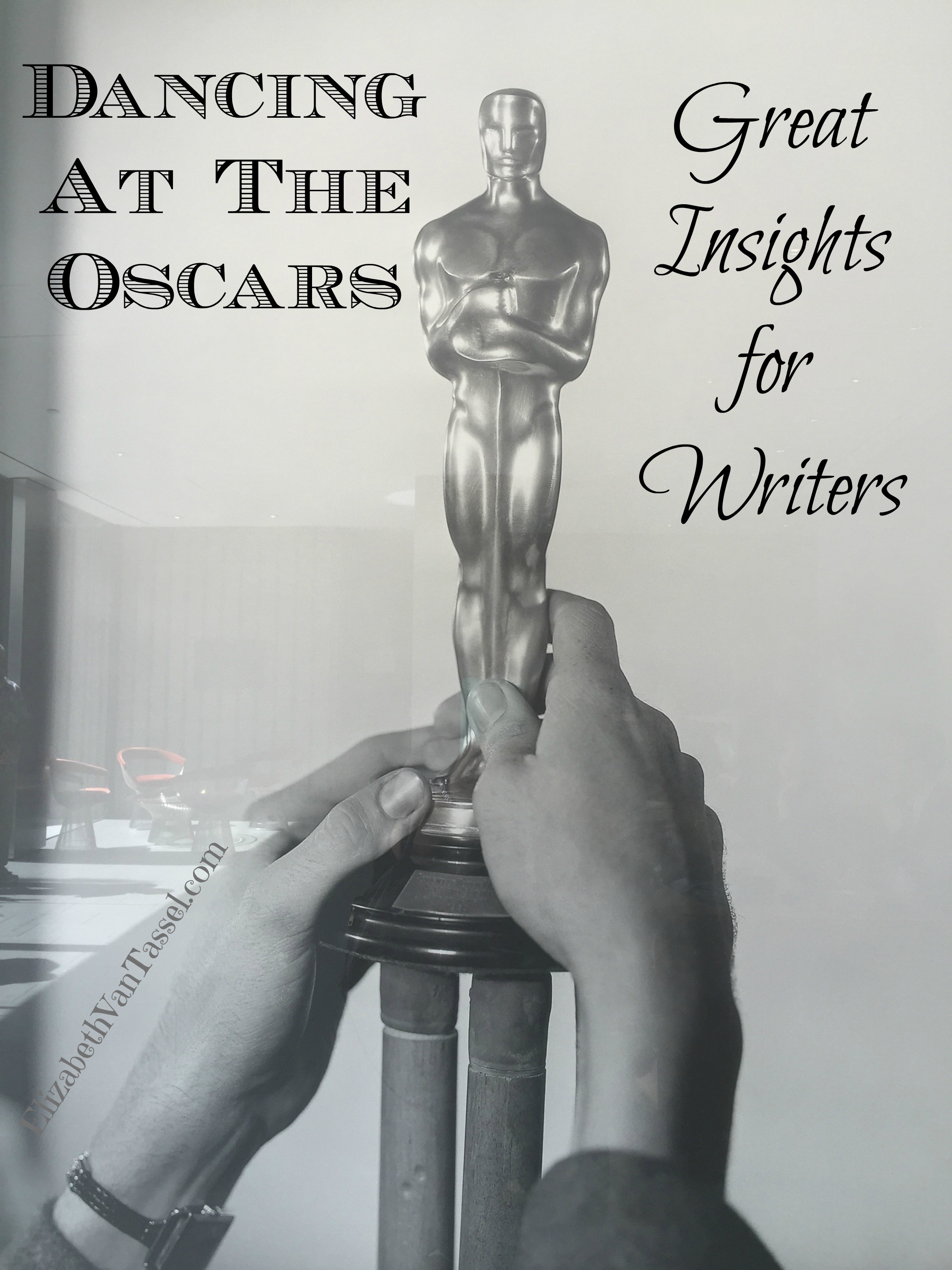 Earlier this week, author Sandra H. Esch and I traveled to Los Angeles for an intriguing set of pre-Oscar meetings at the Samuel Goldwyn Theater in Beverly Hills. We left very early morning, hoping to glean some insights as writers. Sandi is working on some screenplays, and as a fantasy writer that loves great visuals, I wanted to see things from the Director’s perspective, like learning an intricate dance.

When I was an undergraduate, I took a wonderful cinema course at USC (before I realized I was really a Texan at heart and transferred to Baylor:). I learned to appreciate perspective, shadows, how music and light and wardrobe can build tension or release it, how thrills are built in the undulations of a good story structure, and how to elicit emotion from the audience with iconic images. This course has resonated with me through the years and allowed me to see good things whether or not I like the plot and story line of any movie.

This week, as I traveled to Los Angeles to sample a small tidbit of insight about the movie-making process, I was reminded of that moment, when in Citizen Kane, he mutters his final word, “Rosebud” and I watched in horror as the sled was burned, symbolizing the simple death of his childhood dreams and innocence, and so much more. These visuals have helped me craft a style of writing where I try to balance rich bits of detail along with a creating a tapestry of adventures that compel the reader forward.

I’d hoped to just leave with a few nuggets of insight, and was very curious about how the intricate hair and makeup items were prepared. And thankfully the sessions we attended were free from the political nature of the actual event (which was very disappointing. And where was Star Wars?? But putting this aside…) What I left with was tangible insights about the love of craft the directors have, the great lengths they go to incorporate traditions and small nuances with meaning into important stories, and especially some more specifics about how the details in framing your characters can really come alive on the screen. I’m splitting this into two blogs with thoughts for readers and writers alike.

It felt like a bath of luscious details watching the international take on film as the Foreign Language Film nominees revealed their insights about how they made decisions about film vs. digital methods, whether to use native or professional actors and a host of other decisions. My favorite thing was seeing the passion the directors had for finding the best way to convey the look and feel of each movie.

Whether it was the black and white, coarse texture like old photos of the early explorers for the movie about indigenous natives in Colombia in Embrace of the Serpent, or the horrifying pain and thoughtless loss of life in the Holocaust in Son of Saul shot through a smaller lens like a series of photos, the directors highlighted their process. It was fascinating to learn one director in Afghanistan, in the movie A War, used actual refugees so their reactions would be authentic and preferred digital film so he could just let them react without being scripted.

Each director put tender, careful detail into how the audience would:

The crisp and clever details of setting lend so much to the whole experience of story, much like the kind of film or digital imagery used convey different looks and feel for a movie. Where you place the action in the scene is almost as important as what’s happening in that scene. If you say, for example, it’s a jungle scene, are you near a river or tangled up in vines? What animals, smells, and life is teeming in the background? Even if you don’t write in those details, soaking in them as the writer will lift your story to another level. Ciro Guera, whose story takes place in the wilds of Colombia, said “There are 30 different words for ‘green’ there.” His passion for connecting with the needs of the indigenous people was so convicting. It makes me want to be very authentic in representing international locations in my books, and also the magical locations I craft as well.

The directors were fearless about portraying the realities of death, but my favorites also brought beauty out with the severity, side by side, the contrast making the story even more poignant. In my stories, I want to have both sides of life, rather than bathing solely in the hearts and flowers, or in the dark corners. Contrast adds tension and always seems to peel away the veneer of the urge to either protect the reader, or remain in the utter darkness permanently. Next week will be part two, hair and makeup and what they taught me about dancing with the Oscars.